Nymphs in your Area!

I really like the idea of Nymphs as, like, natural spirits who take the form of young women and just hang out in their environment. I think the way they are treated in pop culture sucks because they are taken as sex-crazed female divinities (which is where we get the word “nymphomania” from). In OD&D, dryads have a 90% chance of charming visitors into never leaving their forest. What gives with that?

I’ve been thinking a bit about how to handle magic for a DIY-fuck-your-book nonsense project, and it occurred to me that there might be room for nymphs in a sort of animistic setting. I’d say “This is a take on druids!”, but I’d be lying because I don’t know anything about druids. This is more like Roman folk religion where divinities called numina live just about anywhere.

Out of respect, let’s not call our figure a druid. Why not whisperer, to be vague? The whisperer can seek out and talk to nymphs to investigate or learn more about certain natural areas.

Nymphs live anywhere. They most famously reside in trees (dryads), ponds (naiads), seas (nereids), and mountains (oreads). There are other types of nymphs with different names, but these are the most familiar few and they will suffice for a variety of outdoor environments. What matters is that they are there, and that they are tied to their particular location.

Most adventurers have to do lots of hard work to explore and investigate an area. This is something which takes up a decent chunk of the day, at least to learn about things that are not immediately obvious while passing through the area. (This is boilerplate.)

Whisperers, though, have it easy: they whisper to the environment and seek out what divinities, or nymphs, live there. The nymph(s), being divine personifications of natural things, are very familiar with the area they call home. They know whatever a tree, pond, sea, or mount might know. Have any travelers stopped by for water? Are there any new human settlements in the area? What ships sail these waters? I’d like to think the set of possible questions and answers would be endless! (But I'd rather just like hang out. Wouldn't want to bother a stranger with random questions unless I was really stuck.)

Still, having all that without drawbacks or limitations runs into a similar issue as when a ranger is in your D&D 5e party: the character’s skills bypass opportunities for interesting play. One simple restriction might be that a whisperer can only whisper to a certain kind of nymph, like to a dryad or to a naiad. This means that a dryad whisperer cannot seek out a naiad for help.

Another complicating factor might be, if the encounter is treated as such, the reaction of the nymph. She might not always be happy to meet with a human, especially if it means waking up from her usual state. Is she groggy? Is she pissed? Is she even just cautious? This means that meeting a nymph is not a free info dump, but is calling upon a character who lives in the world and has her own thing going on. This might be even more complicated if you have a handful of nymphs nearby, like you roll your die and there’s six of them [1].

It’s late now so I can’t think of a way it makes sense for a whisperer to “level up” in the same way as the traditional classes, so it might be better for whispering to be a character ability you can claim rather than a distinct character type or whatever (not that we ever run anything for longer than a couple sessions anyway). In any case, it would just make me happy for the world to be full of nymphs just hanging out and doing their thing. Like, I’d want to be a nymph’s friend.


[1] If anyone were tempted to turn this into a fucking battle, I’d make sure the nymphs were strong enough to not take any shit. I get that nymphs getting helplessly chased is a motif, but I don't like that. A better solution: don’t play with assholes.

Popular posts from this blog

The OSR Should Die 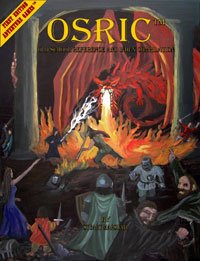 Is the OSR dead yet? If you asked a couple of my friends, they would say yes: there was a body of cultural knowledge which has been rendered inaccessible (for some reason) to hobbyists who are working in the same space. What is old is new again, so now people are talking about random encounters and reaction rolls as if they had discovered them themselves like Christopher Columbus discovering the Americas. Obviously, they weren’t the first ones there and, if you were to ask my friend Ramanan Sivaranjan from the Save Vs. Total Party Kill blog, no one had left either. The OSR is not dead because he’s still there, and he still keeps up with people from the time of G+ who are also all still doing their own thing if only somewhere else. How can something be dead and alive at the same time? It could be a difference of definitions. It could also be a zombie. An authoritative definition of the OSR is difficult to arrive at because any one definition is sure to attract contention from at least
Read more

After months of writing and rewriting and analyzing and formatting, the body text of Fantastic Medieval Campaigns , my retroclone of the original 1974 edition of Dungeons & Dragons (a.k.a. OD&D or 0E ) is basically complete! I wanted to take this time to talk about my motivation in working on this, how far it's come along, and what steps are left for me to feel satisfied in putting at least an initial version online.
Read more

Steps to Demonetize the TTRPG Hobby

- January 27, 2022
You can quit playing your pretend games wholesale and go back to living an undisturbed life not worrying about what a lyric game is or whether indie creators are more or less oppressed than Minecraft youtubers. However, I myself began following TTRPG hobbyists on Twitter because I liked being part of the discussion and learning how to have more fun with my friends. I had even been lurking for years earlier, reading blogs and threads and archived G+ posts. By the time I decided to join the conversation, the predominant mode of interacting with everyone else was selling PDFs on the internet. It took me a while to realize that none of that was necessary or desirable for myself. It took me until more recently to realize I didn’t have to put up with others doing it either. I want an exit from what has been sold to me and others as normal. Something we can do, on an individual and a collective basis, is to reject the predominant culture of the hobby and to strive for a community with non-com
Read more

Marcia B.
Hi there! My name is Marcia and I like to blog about tabletop games and analyze cultural trends through a Marxist and Freudian lens.