I just read an article by Yora of Spriggan’s Den about extrapolating a scheme for an eighteen-room dungeon from the procedural generation rules in B/X (1981) [1]. As Yora points out, eighteen rooms is a great size for a mid-to-large dungeon or for a floor of a multi-level dungeon, and the checklist of rooms makes it easy to make sure that the final product has a variety of interesting play interactions. But, being as large as it is, it can still be a tall order on the fly. My first thought was, having read nothing but D&D (1974) for over a year, the procedural generation rules for dungeons must be simple enough compared to its successor that the number of rooms would necessitate be smaller. It turns out that this is not the case but, hey, if you could condense the typical D&D experience into just a handful of rooms, why not? It would help make dungeons in a jiffy, and it would make it easy to make large locales out of modular parts. This approach is superficially similar
4 comments
Read more

A Basis for Reimagining Chainmail

Chainmail is an interesting ruleset for mass combat as well as individual scale combat, but its rules are a bit disparate and convoluted. They can also be difficult to interface with the use of a Dungeons & Dragons campaign, where we might expect mass combat as well as individual combat against typical human-like beings or fantastic ones like dragons—all of which are given distinct subsystems in Chainmail . This is my attempt at a unified system of Chainmail , working with the abstraction of the mass combat system as well as the relative simplicity of the one-versus-one combat system. This will entail initially an analysis of the mass combat system with respect to its likelihood of landing hits as well as to its implicit attack classification system. Then, I will discuss four methods to redesign Chainmail : by approximating mass combat in standard dice rolls (A&B); by using variable dice to represent types of units (C); and by simplifying the existing system to focus on ratio
Post a Comment
Read more

- November 14, 2022
Just released my 1974 remake Fantastic Medieval Campaigns on November 11! Here, I wanted to answer some frequently asked questions and feedback. Some of them are mistakes I want to correct, and others are things I want to clarify about the text and its approach. I owe many of them to comments on this blog which I cannot reply to because my computer is broken! I felt bad about not being able to respond, so I hope all y’all see this. Update 2022-11-18: Updated once again with respect to the issues below! Update 2022-11-16: Thank you to lvp0s93 for noticing that some spells have not had their descriptions written! I will update this page when I have updated the PDF again. Below is a list of more issues I want to resolve: p. 20: “lord” should be capitalized. p. 49: The spells “Bless” and “Find Trap” have missing descriptions. p. 177: “Light horse” should be renamed to “light cavalry”. p. 188: Replace “italicized” with “underlined”. Update 2022-11-15: Many of these issues have been fixed i
2 comments
Read more 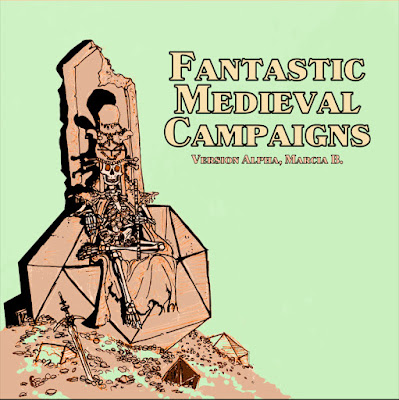 After almost fifteen months of extensively studying the original 1974 fantasy role-playing game, Fantastic Medieval Campaigns is finally available for download!! I wrote up a longer thing, an explanation and justification of my work, on the Itch page where you can download it. So, with that being said, click the link on the widget below to download the book! FMC by Traverse Fantasy Below are some more screenshots of the color version of the text, just to show y'all the final product in case you haven't been keeping up with it on my Twitter . Keep in mind, also, that my computer is officially broken so you can ony reach out to me there or on the Itch page linked above. Thank you all so much for your support and encouragement throughout this huge project!
4 comments
Read more 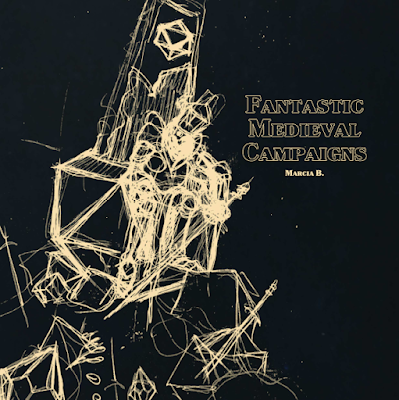 Releasing an "alpha" version of Fantastic Medieval Campaigns this Friday (11/11) on my Itch ! FMC is my free retroclone of the original 1974 manual for fantasy campaigns, in four chapters: Chapter I, Mortals & Magic: Explains how to generate fantastic characters, fight terrible monsters, and cast magical spells. Chapter II, Monsters & Treasures: Lists different kinds of monsters and the treasures they guard from characters that encounter them. Chapter III, Fantasy Adventures: Procedures for a vast campaign that will see adventurers delve into the Underworld and conquer the Wilderness. Appendix A, Chain of Command: The default wargaming system for medieval battles on a mass or individual scale. Appendix B, Indices: Compiled indices for monsters, tables, and spells to help cross-reference different sections of the book. Please keep an eye also on my Twitter , where I will post more screenshots and actually announce when the thing has actually re
6 comments
Read more

- October 31, 2022
The advantage and disadvantage rule was introduced in Dungeons & Dragons, Fifth Edition . It is explained as follows: when you have advantage, roll two dice and take the higher of the two; when you have disadvantage, roll two dice and take the lower of the two. The rule abstracts certain factors of character ability tests that prior (in Third Edition ) would have been handled by adding or subtracting minute value from the roll. Instead the dungeon master need only decide if a character is advantaged or disadvantaged to such a degree that the roll warrants the appropriate procedure. In this post, I want to offer a new view on how this mechanic impacts chances of success by looking at it in terms of boolean (binary) logic and probability. This has implications for how we combine rolls in general, whether we view overall success as lacking failure (disadvantage) or overall failure as lacking success (advantage). Still no working computer. :c The Rules Part An ability test or check
Post a Comment
Read more

There was a recent blog post by Undead Waffle that offers an alternative to the typical D&D hit point system [1]. Rather than rolling your hit dice to determine your hit points, just hold the dice. You won’t need them until you get hit. When you are attacked, your enemy rolls a six-sided die. The result indicates how hurt you are. You get 1 wound point per pip and can sort of sustain up to 4 wounds, but you start bleeding out at 3 wounds. Your hit dice allow you to try to soak up those wounds, to better sustain or even negate the hit if you’re lucky. Suppose that your attacker rolls a 3, which means you’re not dead yet but it’s coming up. If you have a hit die, you can spend it and roll it. If you rolled a 2, you would ultimately gain just 3 - 2 = 1 wound. You can spend as many hit dice as you like, but each one is a gamble. And I’ve done the math: toe to tip, it’s a gamble. My friends asked me to figure out the mathematical effects of the rule on player longevity. Being bored
Post a Comment
Read more
More posts

Marcia B.
Hi there! My name is Marcia and I like to blog about tabletop games and analyze cultural trends through a Marxist and Freudian lens.